It’s 8 p.m. at the Royal Hotel in Murrurundi and the mercury is hovering at around 42 degrees Celsius (107F). After a sweltering day, the locals are gathering at their favorite watering hole — in a town that has no water.

With much of the surrounding state of New South Wales ablaze, Murrurundi represents another crisis wrought by Australia’s nightmare summer. Drought has claimed thousands of acres of land across southeastern Australia, the most populous quadrant of the country, and where the lion’s share of its agriculture is based.

The land looks barren as far as the eye can see. Fields are scorched brown, trees dead from the roots, leaving Australia’s famous bushland a tinderbox that could spark even worse fires in the months to come.

Even without the flames licking at their homes, residents are under threat — Murrurundi is one of a number of towns increasingly running out of water.

“If you drink beer, you’re alright,” said local Warren Bramley when asked what it’s like to live with the drought. 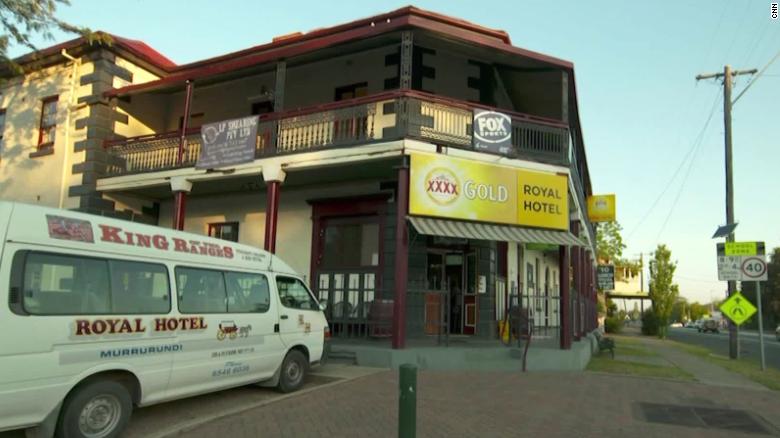 Bushfires are common across Australia, but conditions have been growing more and more dangerous in recent years. This summer has been particularly bad, and rising global temperatures are to blame.

“Climate change is increasing the frequency and severity of bushfire conditions in Australia and around the world,” according to the country’s Bureau of Meteorology.

The fire season is getting longer, temperatures are rising and precipitation is decreasing. The bush has been drying out since January 2017 — the worst drought on record. New South Wales has received less than 125 mm (5 inches) of rain each year for the past three years. That has never happened before, nor has the scale of the fires that have ignited that parched bushland this summer.

Murrurundi, about a three-hour drive northwest of Sydney, has been at the heart of this. The town has not seen significant rain in three years, and the river which cuts through it has run dry. Water is instead trucked in by trucks making between 10 and 20 trips every day. The town would be completely dry in three days if the trucks stopped their runs. The drivers have become local heroes.

Rebecca Willard, a bartender at the Royal Hotel, told CNN that she has to shower her two young children together to save water, before she somewhat sheepishly admitted to doing three loads of washing this week in an effort to keep her kids in clean clothes. The local council only permits two laundry washes per house, per week.

Outside Murrurundi, prize race horses kick up dust in the parched pastures. Racing money keeps the thoroughbreds fed with hay from elsewhere. That’s not possible for local independent sheep and cattle farmers, many of whom have been forced to send prized breeding stock to the slaughterhouse because it’s too expensive to feed them. 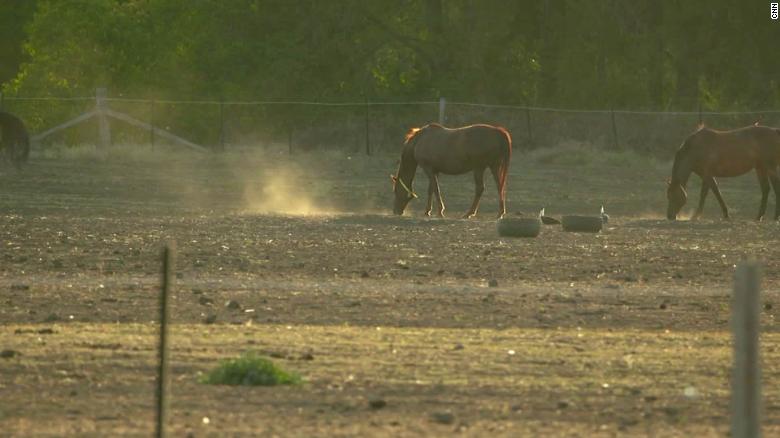 ‘Dry right the way down’

The Australian outback is famed for its dry conditions and red soil — but it’s not the only part of the country seeing major droughts.

Sheep and cattle country just over an hour south of Sydney is also bone dry. Known as “Little England” for a climate atypical in the driest continent on Earth, the Southern Highlands are no longer a green and pleasant land.

James Galbraith and his father Bill farm cows on land that has been in the family for over 130 years. This year’s drought is the worst Bill has seen in more than 50 years as a cattle man. 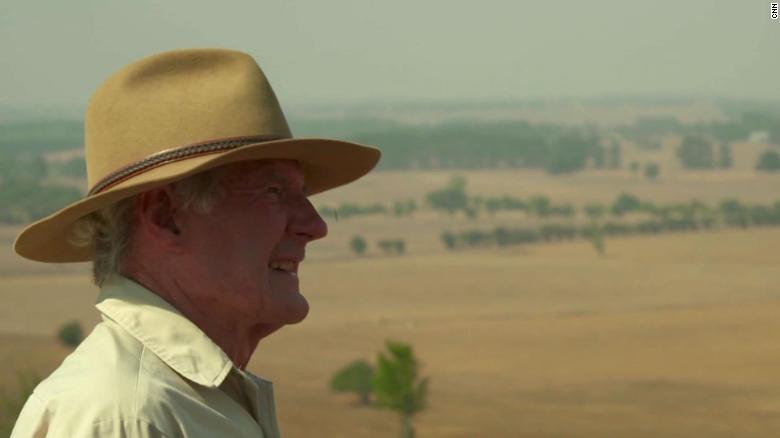 The younger Galbraith said has had to take a second job off the farm to make ends meet, and has sold most of his herd so the cows don’t tear up what’s left of his grass. He wants to preserve the topsoil for when they do finally get some proper rain, which the Bureau of Meteorology predicts could come in April.

“It’s not just dry on the surface,” James Galbraith said. “It’s dry right the way down. So what we’re seeing are trees suffering as well as pastures. For us farmers, we’re just holding on.”

He added that while he wasn’t sure that the current conditions were the result of man-made climate change, he hoped they were: “Then we might be able to do something about it,” he said. 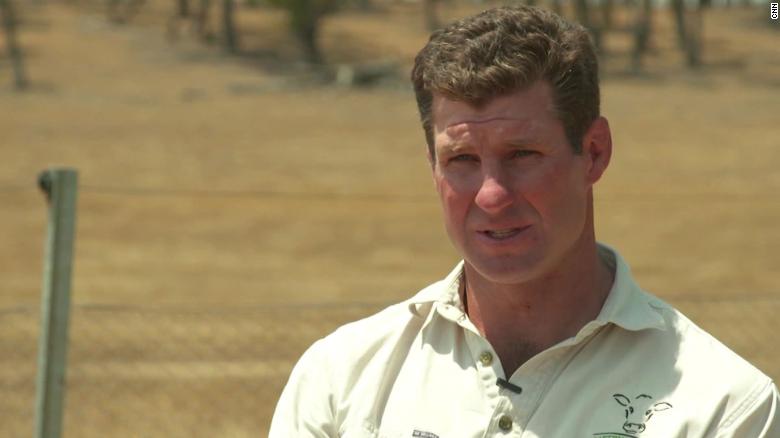 Murrurundi sits in the middle of New South Wales coal country. Every hour, trains rip through the town from open-cut pits to the the coast, where the coal is exported to Japan, China and India.

Non-renewables bring in around $67 billion to the Australian economy every year — only Russia and Saudi Arabia export greater amounts of fossil fuels. This dependency on coal and the power of the domestic carbon industry has hindered efforts to tackle climate change in a country that is on the front lines of the crisis.

This however puts them at odds with Prime Minister Scott Morrison, a major backer of the fossil fuel industry who has faced fierce criticism for his handling of the bushfire crisis. 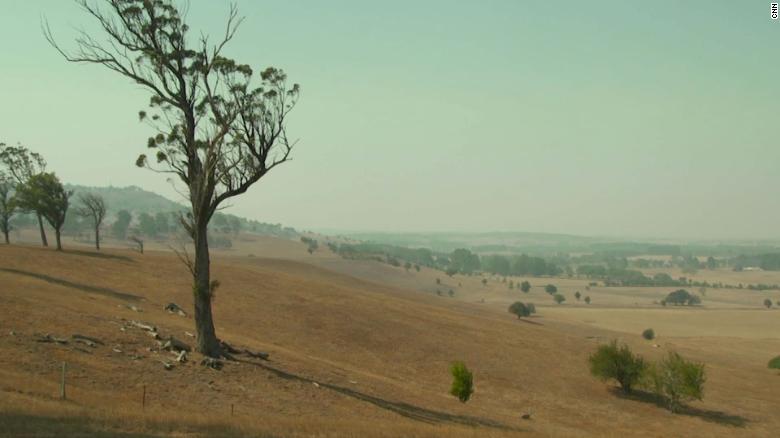 In 2017, then treasurer Morrison took a piece of coal into a parliamentary session. “This is coal. Don’t be afraid, don’t be scared,” he said, to jeers from the opposition. “It’s coal that has ensured for over 100 years that Australia has enjoyed an energy-competitive advantage that has delivered prosperity to Australian businesses.”

Since then, Morrison’s climate rhetoric has softened a little — he has acknowledged the link between climate change and extreme weather, and asserted his commitment to reduce emissions. But he also said that the government would only pursue “sensible” policies, and that there wasn’t “a single policy, whether it be climate or otherwise,” that can fully protect Australia against the fires.

Around 80% of all energy consumed in Australia comes from non-renewable sources, and breaking the country’s addiction to carbon won’t be easy, Jotzo said, but this tragic fire season could be a catalyst for political change.

“This crisis with the bushfire and the drought is the kind of thing which will greatly increase public awareness of the fact that nature matters, that climate change is happening,” he said. “We may see a political shift as a result of that.”

So far this summer, at least 24 people have died, thousands of properties have been destroyed, and millions of animals killed. The total economic cost is expected to rise into the tens of billions of dollars — with no end in sight to the current drought and fires.

“Originally I didn’t think we’d be able to hang on this long,” James Galbraith told CNN on his Southern Highlands cattle farm. “It’s amazing how resilient the country is, but if we miss the coming spring — that’ll put a nail in the coffin.”