AMHERST — A festive Losar, the Tibetan New Year, was filled with dancing and singing at the University of Massachusetts Amherst to celebrate the beginning of the Tibetan calendar year of 2146.

The occasion also celebrated the passage of a bill in Congress introduced by U.S. Representative Jim McGovern, D-Worcester, to penalize Chinese officials that bar American officials, journalists and other citizens from freely traveling to Tibet. The bill, the Reciprocal Access to Tibet Act, was signed into law by President Donald Trump in December.

“We need to hold Chinese officials accountable who are guilty of human rights abuses against the Tibetan community,” McGovern said to a large crowd on the 10th floor of the Campus Center. “If the Chinese government doesn’t want to let — not just members of Congress or journalists — but Tibetan-Americans, if they will not allow you to go visit the Tibetan regions in China, there ought to be a consequence. That means they should not have free access to every place they want to go in the United States.”

McGovern added, “It is a small and modest consequence to deal with their repressive behavior.”

Travel restrictions imposed by the Chinese government currently create significant barriers for Americans who wish to enter Tibet, which has left the area closed off to journalists, government officials and citizens, including those who wish to visit family in Tibet.

One of the organizers of the event, Dahlha Cheshatsang, who is the vice-president of the UMass Amherst Students for a Free Tibet (SFT), said, “Activism on an individual scale can have a significant movement as a whole.”

While the bill was making its way through the House of Representatives, Cheshatsang said he and other activists who are part of SFT lobbied and spread awareness about the issue. 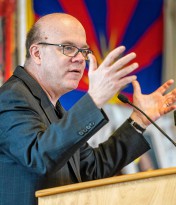 Bhuchung Tsering, the vice-president of the nonprofit advocacy group the International Campaign for Tibet, said the bill has “given hope to the people in Tibet.”

“Today, currently, the people in Tibet are facing a situation where the Chinese authorities are trying to break their spirit,” Tsering said. “The Reciprocal Access to Tibet Act will give them the feeling that the United States, the government and people, have not forgotten them and that’s something we should be grateful for.”

Support for the bill tells China that as long as the Tibetan people’s freedom and rights are violated, the United States will “raise the issue continuously,” Tsering said. “This is a strong message.”

The activism and lobbying on behalf of Tibetan-Americans played an “active role” in making it clear to members of Congress how important this bill was for Tibetans, Tsering said, adding, “We should embrace our hyphenated identity and see what we can do for the people of Tibet through our political process here.”

The Dalai Lama’s succession rests with Tibet, not China