Tibet News Website
Home World Americas A young swimmer was disqualified after a race for how her swimsuit...

A high school student’s win at a swim meet was reinstated after she was initially disqualified because of the way her swimsuit fits her body.

Breckynn Willis, a member of the swim team at Dimond High School in Anchorage, Alaska, had competed in four events at a swim competition Friday.

She swam in and won a heat during the meet, but a race official deemed that her swimsuit had shifted into a position that showed too much of her backside. The official said Breckynn’s team-issued swimsuit didn’t fit her properly and thus violated a rule, according to a statement from the Anchorage School District.

In the statement, the school district did not name the official who disqualified Willis, but said it is moving to decertify the individual. It’s also seeking to suspend the rule, calling it “ambiguous,” according to the statement.

But Tuesday, the Alaska School Activities Association announced it had reversed the disqualification. The Anchorage School District had lobbied the activities association to have the disqualification tossed out, saying in a statement that it was “heavy-handed and unnecessary” and that “our swimmer was targeted based solely on how a standard, school-issued uniform happened to fit the shape of her body.”

The ASAA says it overturned the disqualification because the official didn’t notify the coach about the problem with how the swimsuit fit Breckynn’s body prior to her race.

Her mother thinks it was a form of harassment

Breckynn’s mother, Meagan Kowatch, told CNN that her daughter was wearing the same swimsuit every other member on the squad wears to compete.

“It’s sexual harassment,” Kowatch said. “It shouldn’t have any place on the pool deck.”

The official was enforcing a swimsuit modesty rule, which the National Federation of State High School Associations says is in effect at high school swim competitions around the country.

According to an August memo the organization sent out, there was a growing trend of high school athletes from both genders intentionally rolling up their swimsuits “in such a way as to expose the athlete’s buttocks.”

In light of Breckynn’s case, the Alaska School Activities Association sent a letter to swim and dive officials reminding them that rules require that they must consider whether a swimmer is intentionally rolling up their swimsuit in order to expose their buttocks before they issue any disqualifications, CNN affiliate KTUU reports.

“We would encourage officials to give the benefit of the doubt to the athlete,” association executive director Billy Strickland told KTUU.

Also, an athlete’s coach must be notified before a heat at a swim competition if inappropriate attire is observed, according to a version of the rule introduced for the 2019-20 swim season.

A diagram is debated

Sandy Searcy, the director of sports for the National Federation of State High School Associations, told KTUU that the association is trying to “define the parameters of the problem that quite frankly has been brought to us by adults who are uncomfortable being on deck with young men and young ladies who are not appropriately covered.” 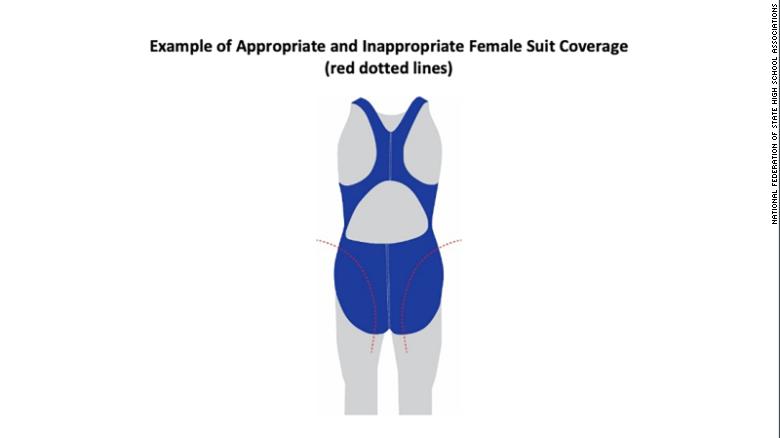 A diagram released by the association shows how swimsuits should fit athletes and offers guidelines for race officials to follow.

But Breckynn’s mother thinks the diagram is out of date, and suggested to CNN that her daughter’s muscular tone made it harder for the swimsuit to fit properly. It shows a “1950s” swimsuit model, Kowatch said, and didn’t reflect the reality of how modern swimsuits fit the physique of high-level athletes when they’re performing.

Was she punished for putting in the work?

Dewayne Ingram, Breckynn’s’ strength conditioning coach, told CNN that in seven years of coaching hundreds of young athletes, she was the “most improved” athlete he’d seen. Starting with a 65-pound bench press maximum, Breckynn surged to being able to lift 150 pounds after a year, putting her in the top three of all female athletes Ingram has worked with.

The swimmer’s mother said she felt calling attention to how a swimsuit fit a teenager’s body sent the wrong signal, especially when her daughter wanted to be able to enjoy the glow of just being named to the school’s homecoming court.

The Tibet News promises to be a fair and objective portal, where readers can find the best information and recent news. We share you with the latest breaking news and Tibet news from other source.